The Pilgrimage Walk  is based on the pilgrimage that people went on from many parts of Cyprus to the monastery of Apostle Antreas in Karpasia.

The modern version of the Pilgrimage Walk  that we designed constitutes a 360-km long, multi-day exploration on foot across much of the island, celebrating Cyprus natural beauty and variety, its rich history and multiculturalism.

Natural Beauty and variety
The Pilgrimage Walk takes participants through some of the most beautiful scenery on the island : sparsely inhabited valleys like Ezousa Valley, Xeros Potamos Valley (with the possibility of vulture spotting), Diarizos Valley, vineyards, forests, rock formations and rugged peaks on the two mountain ranges of Troodos and Pentadactylos. On Pentadactylos the walk is largely along the ridge offering breathtaking views. The last stretch of the walk is in Karpasia peninsula with lush patches, feral donkeys and secluded beaches. At this time it is the west half that we support, as we consider the relevant infrastructure in this part as adequately developed for a a smooth, comfortable walking trip.

​Rich Cultural heritage
The walk starts at Unesco World Heritage 'Nea Paphos' (during ancient times Paphos was considered to be the birthplace of Aphrodite, the Greek Goddess of love and beauty).  Paphos is also the place where Saul of Tarsus got his Roman name of 'Paulus'. Other major cultural attractions on the itinerary include :
1)  Panagia tou Sinti monastery in Xeros Potamos Valley (its repair in the 90s received the Europa Nostra award),
2)  Two of the ten Unesco World Heritage Troodos painted churches (in Pelendri village and in Palaichori village),
3) Picturesque villages (Episkopi Morou Nerou, Trachypedoula or Salamiou, Arsos, Omodos, Palaichori, Fikardou, Pera Orinis, Kalyvakia/Kalavac)
4) Watermills
5) Medieval bridges either on the route or very near
6) A number of monasteries/chapels (eg Agios Iraklidios, Holly Cross in Omodos, Panagia Chrysospiliotissa, Apostle Philippos)
7) Divided Walled Nicosia
8) Gothic BellaPais Abbey
9)  The castles of Voufavento and Kantara on Pentadactylos mountains (battle fields during Richard the Lionheart's conquest of Cyprus)
10) Antiphonitis monastery ​
11) Panagia Kanakaria monastery
12) Tomb chambers
13)  Apostle Antreas monastery in Karpasia
The table below and the rest of the description regards the west half of the route, which is currently supported
The itinerary (summary)
Day 0 - Arrival to Paphos
Day 1 - Nea Paphos to Episkopi Morou Nerou village
Day 2 - Episkopi Morou Nerou via Panagia tou Sinti monastery to Trachypedoula (or Salamiou) village
Day 3 -Trachypedoula (or Salamiou) through Diarizos valley to Arsos village.
Day 4 -Arsos via Omodos village to Pano Platres village
Day 5 - Pano Platres via Pelendri village to Potamitissa village
Day 6 - Potamitissa to Palaichori village
Day 7 - Palaichori to Gourri village
Day 8 - Gourri via Fikardou village to Pera Orinis village
Day 9 - Pera Orinis via Chrysospiliotissa church to Walled Nicosia
​Day 10 - Finish (of the west half of the Pilgrimage Walk) at Walled Nicosia
​
Detailed Itinerary
​On Day 0 from the airport travellers are transported to the center of the city of Paphos where they stay for the first night of the trip. Travellers are encouraged to explore Paphos Unesco World Heritage site (the mosaics are particularly stunning).
​

Unesco World Heritage Paphos mosaics (300 AD)
The west half of the Pilgrimage Walk ends in the medieval Walled city of Nicosia. Nicosia, the capital of Cyprus has many worthy attractions including an excellent archaeological museum, state of the art medieval military walls,  converted medieval catholic churches (including the impressive gothic St. Sophia cathedral - now Selimiye mosque), a good number of 16th and 17th century Byzantine churches, medieval khans, Turkish baths and more. ​Exploration of the city is highly recommended. 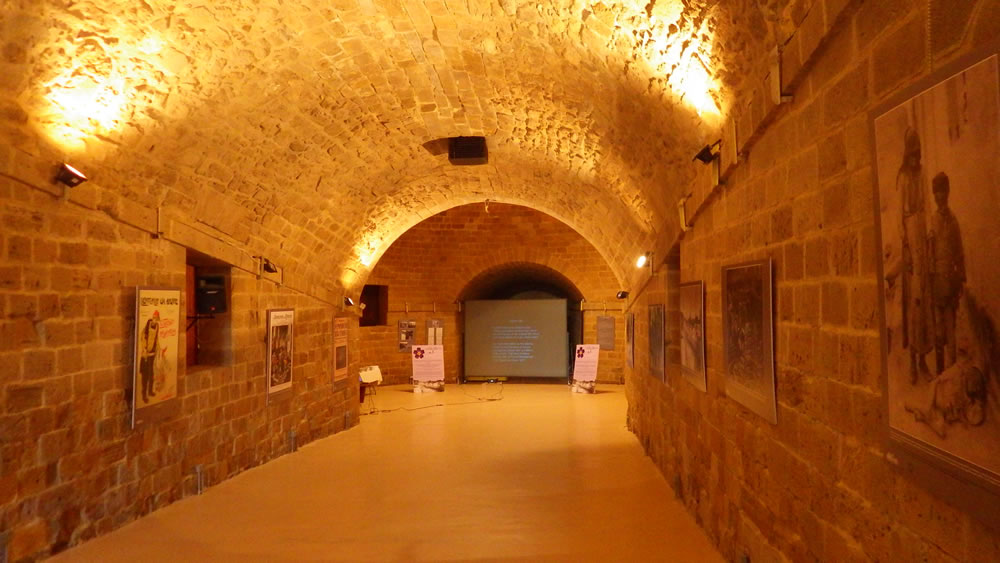 Inside Famagusta Gate - Nicosia 15th century state of the art medieval walls
To be continued ...
We hope to add the east stretch of the Pilgrimage Walk, finally reaching Apostle Antreas monastery soon.
​​Note:
On most days, the walking route passes through or near villages. In many cases there are possibilities for accommodation on many of the villages so the itinerary can be amended (extended to more days) as per traveller advanced request.
​
Summary of our services
We offer Independent Self–Guided Walkers interested in exploring beautiful Cyprus, a menu of services:
The package
It includes the following:
a) Information on the walking routes and nearby attractions (as well as public bus info where applicable), in the form of GPS readings, printed material and/or other media.
b) Transportation-from Larnaca or Paphos airport to the first hotel in Paphos (included if requested by travellers, at an extra fee)
c) Accommodation as follows:
d) Breakfast and dinners for all overnights except for first night (in Paphos town, there are many food options here)
e) Luggage transfer as required
f) On the ground support

Notes :
1) The package doesnot include transport (to the first hotel in Paphos, or from Nicosia) - we can arrange transportation as per travellers' request
2) We have agreements with more hotels in the rare case that the rooms in the above organisations are occupied. In this event walkers will have the option to accept alternative accommodation, reschedule or cancel the booking.


TRAVEL INSURANCE
We expect that all users of our services will make all necessary arrangements to, and will for the duration of their trip with us, be covered by adequate insurance related to our services (personal accident, medical expenses, etc).

​​Please keep in mind that walkers may buy services from us for a shorter version of the trip (eg, a 4-day walk instead of the whole trip) or they may extend their trip staying at any of the accommodation options on our route for more than one day.
Contact Us to Book
BOOK NOW